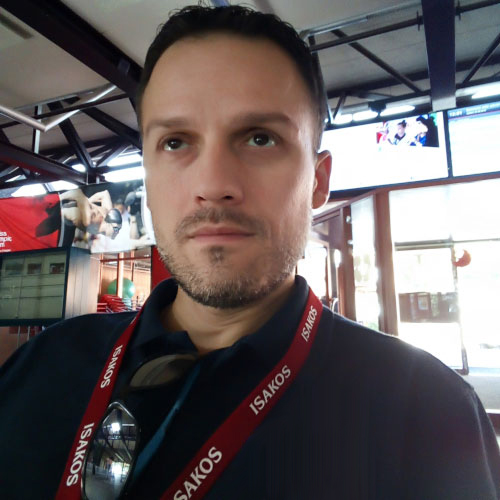 Sebastiano was born in Turin, Italy, in 1980. Always into sports, he raced in BMX, played basketball as a playmaker in high school and reached the national level in alpine skiing. He has been a private ski teacher and part of an agonistic ski team in the Turin area. He played as striker in soccer teams related to the Parma Calcio until his twenties and in the B Italian League of 5 a side football/futsal with the Eurosporting Team. He was then won over by a full speed career as a futsal referee, becoming a CAN-5 National referee in the A1-A2-B leagues in 2007, at 27 years old.

He studied ICT & digital communication as multimedia systems designer, and from 2003 until 2007 worked for the 2nd most important Italian ICT company, within the HQ of Digital Communication, as Web Accessibility Engineer. He specialized himself developing e-government web portals and becoming the web accessibility technical representative for people with various disabilities. He has been a teacher for web accessibility companies. In 2005 he became the 5th Italian member of the World Wide Web Consortium (W3C) Web Content Accessibility Guidelines (WCAG2.0) working group, the international institution based in the U.S. that sets the web guidelines.

At 27 years old, at the peak of his professional and sports career, his life took a complete U-turn; due to a serious knee injury he was forced to stop any activity for more than 4 years, in order to dedicate all his efforts on the recovery, with many surgeries and daily PT 365 days a year. After several consultations with European knee experts, he moved to the U.S for more than 1 year and a half, to become a patient of top notch Orthopedic Surgery and Sports Medicine Rehabilitation Centres, mainly in Colorado and Florida, then briefly in California.

With this extended U.S stay, he had the opportunity to directly experience the marked differences between the European and the U.S clinical-rehabilitative approaches, with the chance to do such thing directly with worldwide renowned surgeons and PTs, that later became mentors. This experience led him to choose pursuing a new path once back on his feet.

He enrolled for a 4 years BSc in Phisiotherapy in Lugano, Switzerland, and accomplished it with the highest grade point average (GPA) of his course. During his studies, he went back to the U.S in order to furtherly expand his own educational developement with the American approach and on the whole he carried out as follows:

Since 2015, he joins several surgical teams observing in the O.R. in Italy, Switzerland and U.S.

He completed a series of postgraduate specializations:

Sebastiano is the co-founder and President of the non-profit company NFC, that organises CPD courses for PTs & MDs in Italy, which he consecutively translates from English to Italian.
In 2017 he co-founded NOVAVIA Project, a company that acts in the field of professional Evidence-Based education (CPD courses, workshops, etc.) for MDs, PTs and ATs mainly in Italy, Switzerland and France. The organized courses involve the highest level of professors, physioterapists and medical researchers from all over the world, with Sebastiano acting as their interpreter from English to Italian and being the assistant of some of them during the teaching process.

He currently contributes as Italian translator of rehabilitative guidelines and he's in the process of translating further scientific manuals - some of the translations are listed below:

Sebastiano also is a:

Sebastiano started practicing as a physical therapist in Switzerland at Fisiosport Minusio in the summer of 2017, then from August 2018 he also began working at the Centro Cantonale di Medicina dello Sport (CCMS) in Tenero and since the summer of 2018 he co-founded Sports Rehab Lugano along with his managing partner Andrea Balboni (Physical Therapist). Moreover he's the team physio of the Swiss National Swimming Team (Swiss Swimming) for the Elite, Youth & Juniors teams.

Since the beginning of 2020 he started working as a part-time clinical researcher at the Clinical Research Orthopaedic & Traumatology Unit of the EOC Regional Hospital in Lugano.

Sebastiano is a strong supporter of the Evidence-Based Practice in rehabilitation and he takes care of the standardization of the clinical practice within the FisioSport Team, sharing the guidelines and the constant updates, thanks to the exchanges with the international experts he's in contact with. He works with patients on a daily basis in order to help them in the process to recovery from an injury, whether they are professional athletes, "weekend warriors" or recreationals.

Two are probably the current goals:

You become what you think about most of the time