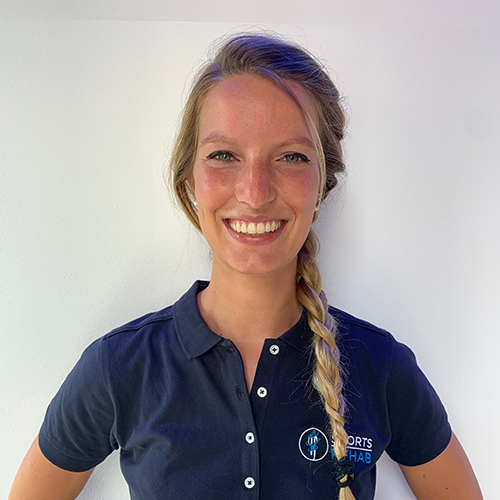 Carola was born in Biella (Italy) in 1996.
Thanks to the proximity of the city to the mountains, since she was a child she has been passionate about sports and physical activity in contact with nature, such as skiing in winter and long walks to mountains shelters during summer.
She always had a deep interest in the healthcare sector, intrigued by the functioning of the human body, by the mechanisms of pain perception and by the psychological aspect of accompanying the patient during the phases of the injury.

Graduated in 2019 in Varese at the University of Insubria with honors, she began working in her field of greatest interest: musculoskeletal and sports rehabilitation.

After a first experience in Rugby Varese and in VolleyTeam Castellanza, during the last year of university, she was hired as head-physio at Biella Rugby (Serie A) which she will work for two seasons.
At the same time she worked as a physiotherapist for the youth teams of Pallacanestro Biella and in a rehabilitation center based in Biella.
Carola worked also in several tennis tournaments of the ATP Challenger Tour, including an ATP125.

As a supporter of the importance of professional updating, Carola is a collaborator of NOVAVIA Project, a company that deals with organizing Evidence-Based professional courses in Italy, Switzerland and France with teachers among the best known physiotherapists and medical researchers at an international level.
In order to have more competence in the field of re-athletization, in March 2021 she obtained the "Certified Strength and Conditioning Specialist" (CSCS) certification issued by NSCA (National Strength and Conditioning Association).
She has also specialized in lymphatic drainage and she is currently specializing in the field of manual therapy.

In her free time, Carola loves being outdoors and practicing sports (including running, surfing and trekking) but above all she loves traveling and discovering new cultures.