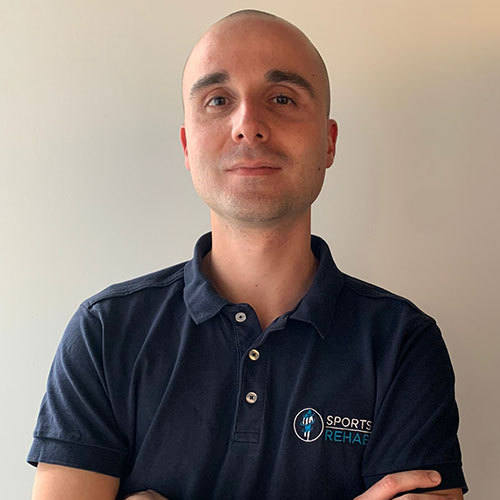 Luca was born in Sorengo in 1991 and grew up in Valsolda, a small border town on Lake Lugano. Since childhood he has shown a great passion for sports. At the age of five he began practicing football, wich was his greates passion for about 20 years. Unfortunately, the constant injuries forced him to stop but that's how he approached the physical therapy field. Luca has always had a great passion for the mountain and its landscape, he practiced amateur skiing since a very young age but only in 2015 he discovers the love for mountain running. Since 2016 he starts competing with ASD Atletica Pidaggia 1528 and realized he's particularly predisposed for long distances. Although running was just a hobby, thanks to the results obtained in just one year, he gets the pass to participate in competitions on the Italian and world Skyrunning circuit such as Giir di mont, International Rosetta Skyrace, Bellagio Skyrace, Scenic Trail K54.

He graduated in physical therapy at the University of Insubria in 2013 and after completing some short courses, he began to get passionate about musculoskeletal rehabilitation. He obtained the OMPT title in 2017 after attending the Master in Musculoskeletal Disorders Rehabilitation at the University of Genoa, an experience that led him to have an Evidence-Based working and training approach. From 2018 to 2019 he continued his post-graduate university training by completing the Musculoskeletal Physical Therapy CAS at the SUPSI University in Lugano. He constantly attends refresher courses.

He began his profession in 2013 at the Gaetano Pini Orthopaedic Institute in Milan where he works in the rehabilitation field of orthopedic traumatology and neurosurgery. At the end of 2015 he began working in Ticino in a private practice that practices outpatient rehabilitation in the musculoskeletal area. Over time he begins to treat sports patients and he realized that he can combine his two great passions: sports and work. He understood that this is the right way to go so he dealt with the rehabilitation of the players of FC Gambarogno Contone, a Swiss interregional second league team, from 2019 to 2022.

He spends his free time with his daughter Viola, he loves reading books, traveling and enjoying nature and its wonderfull landscape.