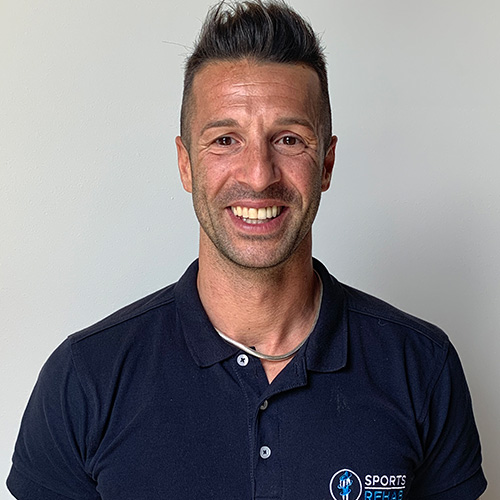 He has been passionate for sports from an early age, always interested in multiple sports. When he was 6 years old, he approached basketball, then practicing it for 10 years. At the age of 16 he decided to stop his competitive career as a basketball player to better dedicate to studies, continuing to play at the amateur level in the team of the high school technical institute where he used to study, eventually winning the regional school championship.
After completing the high school studies, he resumed competitive sports with boxing at the age of 19. Marco was involved in several matches for the FPI in its category and participated in the Lumbard Belt.
At 22, his love for sport led him to enroll in the Faculty of Motor Sciences at the Insubria University of Saronno, subsequently deepening his knowledge into the world of rehabilitation by enrolling in the faculty of Physical Therapy at the L.U.de.S. University of Lugano, continuing his competitive sports career at the same time.
In 2008 a surgical procedure drove him to abandon the competitive spirit.

Marco in 2009 completed his studies as a Physical Therapist with a note of merit and recognition of the Swiss Red Cross.
In 2010 he worked as a Physical Therapist at the "Clinica S. Giuseppe" in Como, taking care of orthopedic and neurological patients, whereas he remained in the sports’ world following the national Serie B women's volleyball team "Picco Lecco" as a team Physical Therapist.
Here is rooted the passion for Beach Volleyball, the sport he’s still practicing in the current days.
The competitive spirit anyway never fully left Marco, that participated in various FIPAV Beach Series competitions as well as official Swiss Volley tournaments during the summer seasons.

Anyway, this did not reduce his desire to grow professionally. Marco obtained the "Orthokinetic Physical Therapist" certification c/o GSTM Specialized School in manual therapy in Milan in 2018, where he is currently pursuing a Post-Graduate Certificate (Master Universitario di 1° livello) in Manual Therapy & Musculoskeletal Physical Therapy. At the same time his participation in a variety of post-graduate continuing professional development courses remained active.

Don’t fear difficult moments. The best comes from them